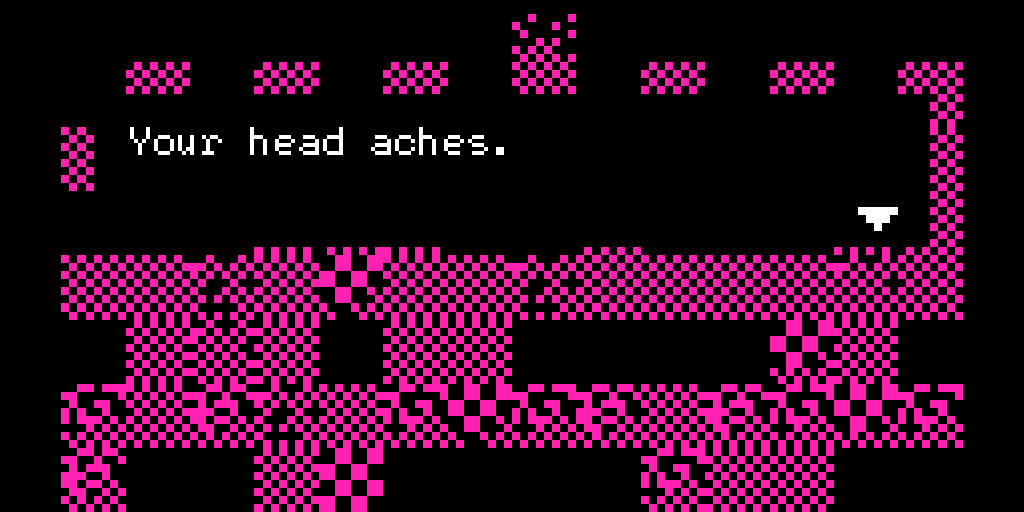 Exhume, a small game that I made, was recently part of an exhibition. I found this really flattering, but also really, really weird. It sent me spiraling back into something I thought I’d got past – impostor syndrome.

In a nice twist to the usual stories, I actually did start out as an impostor. My first real job in marketing was entry-level admin, but circumstances quickly led to me hanging out with celebrities at VIP events & being asked to give keynote speeches to roomfuls of millionaires. It was amazing at the time, but looking back it’s just unreal. I was a junior who knew how to use Photoshop & make websites, but was frequently treated with the responsibility of an international brand manager. With it came a lot of expectations, and for someone at my level those expectations weren’t practical. I didn’t have the knowledge or background to be that person, and I wasn’t stupid enough to try and bullshit my way through. So I did what I always do; learn intensively.

I continued to devour every bit of knowledge I could, filling in gaps about the industry, strategy, trends, everything. I’d gotten good at my job but still felt like I hadn’t “earned” it. I left soon after that.

I have a tendency to collect and curate, both physically and mentally. I’ve built up a needless amount of knowledge, both useful and inane. Any subject that even slightly interests me or anything I want to understand more on, I’ll learn whatever I can about it and try to give it some practical application. From the history and use of pre-radar acoustic mirrors (actually really interesting), analytical comparisons of indie game marketing strategies (I don’t even work in indie marketing), obscure knowledge of Keanu Reeves movies (no one needs to know this), to obsessive appreciation of early experimental and Dadaist music (Duchamp had some real bangers). That’s where Exhume came from, a little game that I’d made because I found Bitsy (and its passionate community) fascinating & wanted to learn more.

The game itself is a mess of ideas, my first Bitsy game and mostly exploring what could be done within the limitations of the platform. I genuinely appreciated some of the very nice things that were said about it, although to me it was still just “a thing I made”, nestled somewhere with all of the other art and music I make that never sees light of day. This was a different form of impostor syndrome to that which I’d been used to. Having any form of validation given, let alone inclusion in an exhibition with other games, felt like someone had made a mistake. It wasn’t until I went back and played it that I remembered how much time and thought I’d put into it. It was still an inane little game that ultimately doesn’t make sense, but it did some cool stuff along the way. I don’t think it really compares with the other excellent games on display, but it felt ok to have the effort recognised. A valid contribution. Impostor syndrome cleared (-ish).

I’ve been working in marketing / PR / community roles professionally for nearly 10 years now, plus several projects outside of that, but I still find myself doing extra work I don’t need to in an attempt to ward off impostor syndrome. The big shift for me was that I began to notice people asking for advice on marketing or PR (which should have been a clue tbh), but hadn’t considered so many things that seemed basic to me. It’s because the answers I gave weren’t obvious things that other people consider. They were the direct combination of knowledge and experience I’d been gathering over time.

I realised it had been happening a lot, and I’d just not noticed. Everything I did with Grads In Games in particular, from writing full guides in response to emails asking for careers advice, to being there at midnight on submissions day to support people, it was actively sharing what I’ve learned with those who can benefit from it (even when sometimes the only lesson was “be nice to people”).

And that realisation is how I mostly was able to deal with it. Sharing things I took for granted, my knowledge, my experiences, can have actual benefit to others.

Admittedly, writing all this like I’m some font-of-all-knowledge has been a real good way to start questioning myself. It’s not been a great journey, honestly, and I’m sure it’s contributed to other mental health issues as well as my tendency to thrive at working quietly behind the scenes. If it’s something that affects you, I hope that reading this helps you cope or understand a bit better. If it’s not, then the message is more simple; Devour all knowledge. Help others do the same.

p.s. I figured it would go without saying, but reading back through I want to clarify – don’t force ‘help’ on people who don’t ask for, want or need it from you. Don’t be that person.